The 44th Regiment of Foot 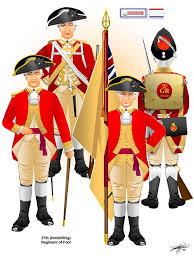 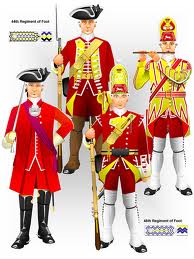 In the of January, 1755, under the command of Major-General Braddock, the 44th, along with the 48th Regiment, sailed from Cork for Virginia. As part of the plan to engage the French in America, Braddock's force was to attack the Fort du Quesne, on the Ohio, Pennsylvania. The army had to cross the Allegany mountains. The journey was long and hard, as much of it was through unmapped, road-less country. The men frequently had to cut their own path over steep inclines, rocky ground and contend with rivers and torrents. They also had no support from the local province. After arriving at Fort Cumberland, Braddock was informed that the French were apparently to be reinforced. With this news, he decided to force march the army to meet the French. Despite protests from the likes of Colonel Sir Peter Halkett of the 44th, Braddock camped his force within ten miles of the fort, over forty miles from any reserve and support. Even though they were now perilously exposed to the risk of ambush, Braddock also ignored advise to use Indian scouts and to proceed cautiously. Braddock marched on blindly. On the 9th of July, Braddock's army was hit by fire from the front and flank. The advanced guard, comprising of the Grenadier company of the 44th led by Brevet Lieutenant-Colonel the Honourable Thomas Gage, took the main brunt of the first volley. From one hundred Grenadiers, all but twenty-two men still stood. In the confusion caused by the thick smoke from the shooting and the total surprise of the attack, eleven more men fell, some to their own comrades guns. Three more Grenadiers later died of their wounds. Braddock's incompetence continued as he ordered a holding action, rather than a retreat. The Major-General was too shot, in the leg, and was carried from the battle field by Lieutenant-Colonel the Honourable Thomas Gage of the 44th. Braddock died four days later. Throughout this action, of Braddock's aides, Colonel Washington was the only one to remain unscathed despite having two horses shot from under him and four bullets pass through his coat. It fell to Colonel Washington to withdraw the remaining men from the action to safety, which he did so with calm professionalism. Braddock's army lost seven hundred men, including Colonel Sir Peter Halkett, Bart., The regiment also lost Captains Charles Tatton and Henry Bromley, Captain-Lieutenant Richard Gethin; and Lieutenants James Allen and Robert Townsend. The Colonel's own son, Lieutenant James Halkett, also of the the 44th, was killed. 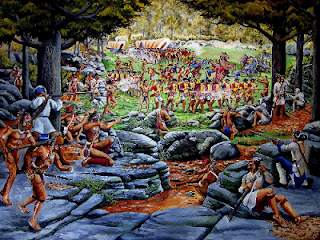 In the August of 1758, now with Major-General James Abercromby for the Colonel, the 44th was to relieve Oswego, on Lake Ontario, which had been taken by the French. Before they arrived, the French destroyed the fort and reinforced the army at Ticonderoga. The 44th then joined the 27th, 42nd, 46th and 55th Regiments to assail the French at Fort Ticonderoga. Whilst on route, the British came across and detachment of French. For a few losses, the British killed three hundred French and took one hundred and forty-eight prisoners. Arriving in the area, the 44th, along with six companies of the Royal Americans, took possession of the Saw-Mill, which was about two miles from the fort. The French, however managed to destroy the mill and bridge across the river. The next day, Abercromby decided to proceed to take the fort with haste, due to rumours of impending large French reinforcements. Also, due to the nature of the terrain, it was very difficult to bring up artillery, so Abercromby decide not to wait for that either. After four hours of fighting and without removing the French, the British lost five hundred and fifty-one men, with another one thousand and fifty-six wounded. No figures are given for individual regiments, but the 44th lost Ensign William Frasier in the fight. Ticonderoga would not fall until the next year during a major assault on all French positions in Canada.

In 1759, as part of the operation to push the French from Canada, the 44th were assigned to the force against Fort Niagara. Under Brigadier-General John Prideaux of the 55th, a portion of the assemble army included the New York provincials and forces from several Indian nations was commanded by Sir William Johnson. The 44th was attached to this force. The action commenced mid-July of that year. On the 20th of July, Brigadier-General John Prideaux was killed in an accident. The command was taken up by Sir William Johnson. In the ensuing action, the 44th under the command of Major John Beckwith were posted to the trenches to esnure that should the French attempt to break out, they would be met. After fierce fighting, the French finally surrendered the fort on the 25th of July.

The 44th's last action was in the May of 1760. Under Lieutenant-General Amhert, a large force was assembled at Oswego. The 44th regiment formed part of the rear-guard for the attack on Fort Levi, which surrendered on the 25th of August. The army promptly moved on to surround Montreal. The French Governor-General, the Marquis de Vandreuil was compelled to surrender the garrison on the 8th of September, 1760. Canada was now completely under British rule.

From 1761, the regiment's companies were engaged in guard duties in various locations, which the regiment being reassembled in 1765 at Quebec. There, the regiment embarked for Ireland, where it was to remain for the next ten years. 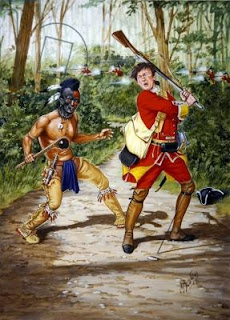 Text and pictures taken from http://44th.webs.com/history.html

Posted by James Brewerton at 06:00