I have been unable to find out which French units were involved in the battle in fact what I did find is that most of the troops were French Colonial’s who were very tough and experience men. I did find in my research that most of the regular troops in Canada were Troupes de la Marine (French Naval Infantry) I did find a few listed units that served in Canada, I have added information below of one such unit. I think for our own forces we can bend history a bit and have some Line Infantry (off White Uniform) and Troupes de La Marine (Grey Uniform) 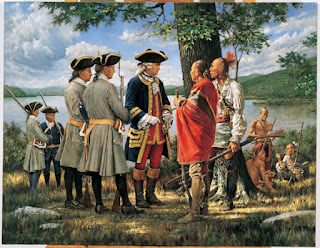 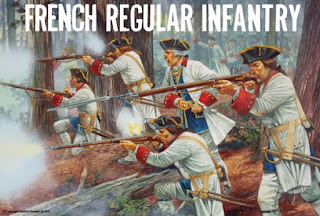 The 54th Line Infantry
It was formed in 1657 during the Ancien Régime as the régiment Mazarin-Catalans, being renamed the régiment Royal Catalan in 1661 then the régiment Royal Roussillon in 1667. Its first battalion fought in the French and Indian War from 1756 to 1761 in Canada under the command of général Louis-Joseph de Saint-Veran, Marquis de Montcalm, with M. de Sennezergue as its colonel. It fought at the Battle of Fort William Henry and at the Battle of the Plains of Abraham – at the latter it was broken and forced to flee by steady fire from the British 35th Foot, whose members are traditionally held to have picked up the 54th's plumes and placed them in their own headdress (the Roussillon Plume being formally incorporated into the badge of the 35th Foot in 1881). A second battalion of the Royal Roussillon served in Germany (1756–1762). In 1756, the 54th Infantry Regiment's uniform was white with blue facings, five gilded buttons for the linings and 3 buttons on each pocket.
Most regiments wore white coats made of unbleached woollen fabric with brightly coloured cuffs of the "distinctive colour". The exact colour of this unbleached woollen coat has given rise to several debates. Since it directly depended on the colour of the wool used, its colour probably varied form a very light grey to off white. Contemporary works such as Taccoli's book and Troupes du Roi, Infanterie française et étrangère, année 1757 depict very light grey (almost white) uniforms; while Raspe's publications in 1761 and 1762 depict white coats.
Each regiment was further distinguished by the colour and quantity of buttons, and the shape and position of pockets. These distinctions were specified by the ordonnances. As per the regulation of April 20 1736, the coat was now buttoned up down to the waist and coat lapels were introduced in a few regiments. When they reached the waist, they were called bavaroise. Turnbacks also gradually appeared. In fact, the basques of the coat could be turned back or left unfastened. With the regulation of 1757, collars of the same colour as the cuffs appeared in many regiments. Coloured lapels were also introduced. The cuffs became smaller and the turnbacks began to be decorated with a hearth shaped piece to reinforce the hook.
Swiss and Irish regiments wore garance red coats; Scot and German regiments turquin blue coats.
Depending on the regiment, the long sleeved waistcoat could be of unbleached woollen fabric or dyed in the "distinctive colour". The waistcoat had two rows of 11 yellow or white buttons and horizontal pockets with flaps but without buttons. The regulation of April 20 1736, stipulated that coloured waistcoat should be suppressed but this measure was rarely applied.
Breeches were usually made of unbleached woollen fabric. They were fastened by buttons at the waist and in front. They also had flaps fastened with 5 small buttons on the outer face of each knee. Gaiters were usually white, fastened with small buttons on the outer face and held in place by a narrow leather strap under the knee. Around 1761 and 1762, black gaiters seem to have been increasingly common.
Following image is taken from www.reeseartofwars.com 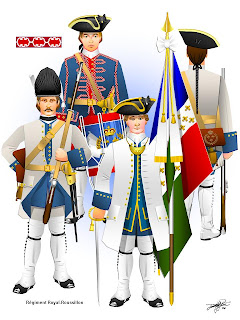 There are some very nice images of French SYW Line Infantry Uniforms on this web page http://www.kronoskaf.com/syw/index.php?title=French_Line_Infantry_Uniform
They have been authorised to be used on the website but the artist retains full copyright so I will not reproduce them here, I recommend you follow the link and look at them. 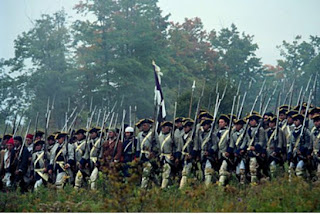 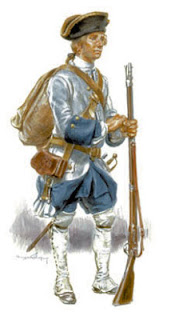 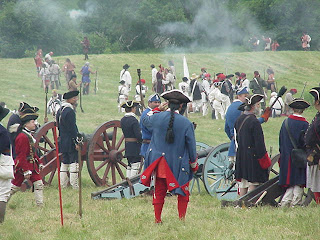 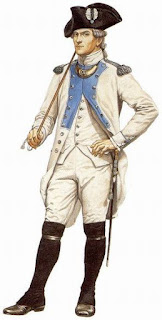 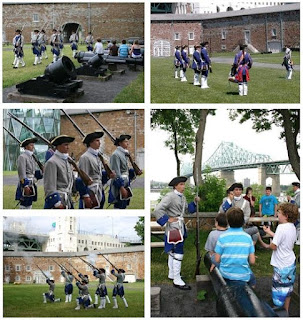 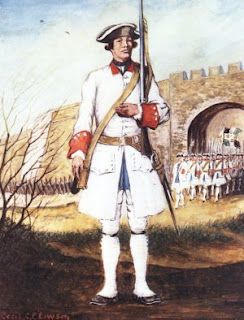 Posted by James Brewerton at 03:54