An opportunity to spend money!

The Bloggers for Charity scheme is pretty much unique and is bound to benefit (hopefully) many people. However, I think it needs more members and, of course, more money in the old oak chest. Blunt? Yeah, I know, but I've got broad shoulders and skin like a rhino.

So, in an attempt to achieve both obvious goals, I've obtained permission from the Presidium to organise a small auction of painted figures as a test to see if it will raise more money than simply putting the figures on eBay and donating the proceeds to the blog. So why go to all this messing? Well, being a realist, I'm aware that it may not raise as much cash as an eBay auction, but it should raise awareness of Bloggers for Charity and gain more members/followers if only because they realise that the only way to get their hands on otherwise inaccessible figures without having to compete against the world is to support the blog. How? Read on.


I'll repost this information and more when the auction opens, but now, what about the figures? Well, those of you who always skip to the end of the crime thriller will have noticed a photo: 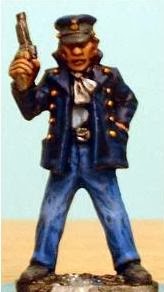 and those of you who know about such things or have a decent imagination (which lets me out) will realise that it's a useful (Foundry) adventure type for Back of Beyond, Darkest Africa or even adaptations of Necromunda There are five explorer figures in total.

O.K., reality check. If you're a bit of a chisler you'll realise instantly that you'll be competing against a pretty small group and that only some of these will bid so you might be able to get the figures for less than you might on an open auction. Fair enough, but just remember it's for a good cause and not just a raid on a charity shop. If it turns out not to be viable then it was worth trying, but that's all folks. However, if it turns out to be a success (measured in membership numbers as well as income) then I've got other stuff going spare and it's a knocking bet that others will have too - and it doesn't matter where the figures etc, are located. by the way, I'm always open to suggestions for improvements and better ideas so don't be shy.

So, as Patrick Moore might have said, watch this space.
Posted by Happy Valley at 17:44